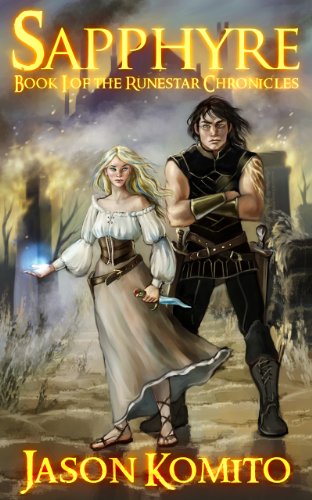 Orphan, thief, healer, demon slayer…..What else will she become?

Sapphyre has always known she has some innate magical ability, but being an orphan growing up on the streets, she is both unaware of where it comes from or how to control it. For the last two winters she has served ale and food in the Dragon’s Flagon and until this evening it has been rather uneventful. The stranger with the yellow eyes has accumulated a large stack of coin at the dice game and has attracted much attention. Sapphyre notices that with each winning role, what looks like a tattoo of a cat’s eye lights up on the man’s neck. Glancing around the table, she is shocked to see that no one else can see it.

Sapphyre learns the stranger’s name and, the following day, listens to his tale. Ashcon explains that he is a runestar and a defender of the light and the stars and has runes, not tattoos, all over his body, that enable him certain powers. The runes can only be seen when he activates them, and then only by extremely powerful practitioners of magic. Ashcon asks Sapphyre to join him and his companion Skken in a search for a man named Sorenthor who will be able to determine why she can see his runes and from where her magic hails.

The first book in this epic fantasy follows Sapphyre and her companions as they attempt to reach Sorenthor’s Library in the hopes of finding answers for Sapphyre as to her true heritage. The meeting between Ashcon and Sapphyre has put into play ancient prophecies. The followers of the Zagador, the Dark Gods, led by Ashcon’s brother Drak’thonn, are spurred into motion and will stop at nothing to track down and destroy Ashcon and his companions and plunge the world into Eternal Night.